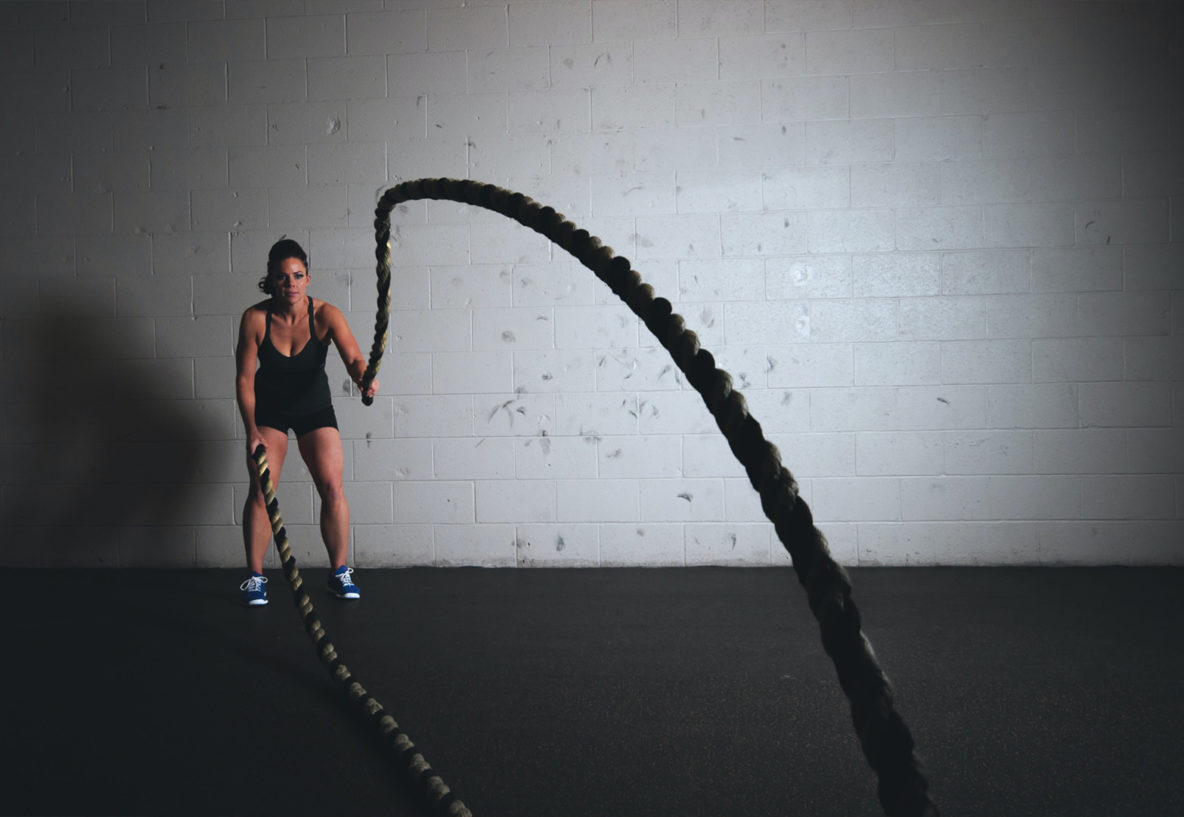 The use of unconventional training implements such as battle ropes, kettle bells, tyres, sledge-hammers, bodyweight suspension devices and sleds, for example, has recently risen in popularity (1). Specifically, such uses range from those within the athletic strength and conditioning realm, through to the general public in order to achieve common fitness goals (1).  The popularity of such training implements are derived by their uncommon approach to exercise training, perceived specificity and unique ability to substantially challenge the metabolic systems required to perform the given task (2).

Commonly referred to as ropes, battle ropes, battling ropes or as undulating training, the general use  of such devices is for energy system development, body composition, providing training variety and injury rehabilitation for return to sport (2, 3). Most commonly, ropes are used in short intervals, whereby the rope is fixed at its half and any given undulating motion is performed (1). Given the versatility of ropes there is a limitless amount of exercise variations, but typically are used in a bilateral wave like motions (1).

Undulating wave motions require the rope to be anchored at a fixed point, with 15.2 metre length ropes the most commonly reported within the literature (2-4).  The diameter of the ropes used in research settings has been similar (3.8 centimetres), however the weight of the rope has varied between manufacturers (10.9 – 16.3 kilograms) (2-4).

One advantage of using battle ropes is the degree in which they can be progressed and regressed, via altering exercise selection (unilateral/bilateral limb movements), posture (i.e. standing, kneeling, sitting, prone, supine) and adding additional compound movements to the exercise (i.e. squats, lunges, hops, jumps, shuffles)(1, 3). Apart from exercise selection, exercise intensity is also dependent on rope size, diameter and length, rest period and also the speed and amplitude of wave motion (1, 3).

Fountaine and Schmidt (4) investigated the metabolic demands of rope training in men and women from an acute 10-minute exposure, consisting of 15-second work periods followed by 45-seconds rest and repeated for 10 repetitions. The study found that males had significantly higher measured energy expenditure (kJ), aerobic energy expenditure (kJ) and peak relative maximal oxygen uptake (ml.min.kg) compared to females. No differences were found between males and females when comparing anaerobic expenditure (kJ), peak lactate (mmol), average exercise heart rate and energy expenditure during excess post-oxygen consumption (kJ). The authors note that this protocol proved particularly demanding with peak heart rates achieving 86% of maximum and suggest that when weight differences are normalized that males and females had a similar response. The authors contended that due to inherent strength differences, females could consider incorporating smaller, lighter ropes, which could be achieved by tying off portions of the rope.  The resultant metabolic responses from this study were suggested to be similar to that of comparable protocols using kettlebells (5, 6).

Ratamess, Rosenberg (2) compared the metabolic effects of traditional free weight exercises, body-weight resistance exercises and a battle rope circuit in 10 young resistance trained men. The battle rope and plank protocols consisted of 3 bouts of 30 second intervals, whilst resistance based exercises (bench press, squat, curl, lunge, deadlift, bent-over row, high pull) were performed for 3 sets of 10 repetitions at 75% of one repetition maximum and the bodyweight exercises (burpee, push-up) were performed for 3 sets of 10 repetitions, all interspersed with 2-minute rest periods (2).  Specifically, the 30-second battle rope circuit was broken into 3 10-second bouts of single arm waves, double arm waves and double arm slams. Heart rate and oxygen kinetics were measured throughout exercise performances (2). The battle rope protocol was found to significantly increase ventilation and heart rate responses moreso than any other exercise within the experimental study (2).  The squat, deadlift, and lunge elicited the largest metabolic responses for free-weight exercises, however the burpee protocol produced significantly larger responses than any of these (2). The authors concluded that the battle rope protocol was the most effective method for eliciting  high metabolic responses (~ 51% of VO2max) and also suggest further research into the use of rope training, particularly investigating differences amongst alternative wave motions (i.e. single arm vs. double arm)is needed (2).

Finally, Ratamess and Smith (3) studied the metabolic responses to battle rope training across different rest interval durations. The researchers investigated the difference in metabolic responses to 8 sets of 30-second rope training, made up of double arm waves and single arm waves (15-seconds each), followed by either 1-minute or 2-minutes of passive rest (3). Oxygen kinetics, heart rate, blood lactate and RPE were measured throughout testing on 12 male and 10 female active young individuals (3). The main finding from this research is that shorter rest periods (1–minute) result in higher metabolic costs, as indicated by significantly increased oxygen consumption, ventilation, energy expenditure, heart rate, blood lactate and RPE for 6 of the 8 sets (3). However, females were found to have lower oxygen consumption responses, 11.1% in shorter and 13.5% in longer rest periods, in comparison to men (3). The mean oxygen consumption responses to shorter rest periods equated to 50-52.8% of VO2max compared to 37.7-40.5% of VO2max for longer rest durations (3).

Unfortunately, there is a paucity within the current literature surrounding the use of ropes and therefore more research is warranted. Specifically, more research is needed to compare the different styles of rope training such as single arm and double arm waves and to understand the responses of rope training in specific populations such as athletes, occupational personnel and the general public to enhance its efficacy. Researchers should also investigate long-term training interventions, to determine acute and chronic adaptations of such training.

Currently, the existing evidence suggests that battle ropes provide significant metabolic and cardiovascular demands when implemented in anaerobic type interval ratios of 1:3 – 1:5, with work intervals <30-seconds. This indicates that using rope training, while specifically implementing bilateral and unilateral wave motions, may be an effective method to improve energy system capacities and metabolic health. In order to regulate exercise intensity, it is suggested that coaches and athletes alter the recovery durations. Additionally, battle rope training appears comparably more effective at provoking metabolic responses than that of traditional resistance and body weight exercises and as such should be considered as a viable conditioning method in order to achieve a range of athletic and health related outcomes.